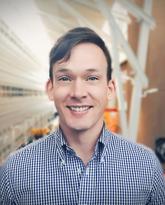 Aaron Phillips was trained in Experimental Medicine, Biosciences and Mathematics. His appreciation of the elegant interactions between the nervous and cardiovascular systems, and understanding how these systems are disrupted in the presence clinical conditions, has driven his research into the development of novel therapies for people with neurological health issues. After obtaining the Banting, CIHR, NSERC, Heart & Stroke Foundation, and Craig Neilsen Fellowships as well as the Killam Research Award during his post-doc at the University of British Columba (UBC), he established his laboratory at the University of Calgary in 2017. He is now a Professor of Physiology and Pharmacology, Clinical Neurosciences, and Cardiac Sciences. Within the Foothills Medical Centre, he is Director of RESTORE.net, which is a platform dedicated to developing translational technology for neurological injury. He has received the Brain Canada Future Leader Award, The Arthur Guyton Award in Excellence in Physiology from the American Physiological Society, and the Top 40 Under 40 from Avenue Magazine. He has funding from several organizations including CIHR, NSERC, PRAXIS, Wings for Life, and the US Military through DARPA. He also publishes in top journals including Nature, Neurology, and Nature Biotechnology.